What better way to launch a new audiovisual magazine than with an issue on eroticism? A hot topic if ever there was one, compelling and divisive in equal measure, eroticism is both multifaceted and controversial. But more of that later.

For this first cinematic journey into the realm of Eros, there are two films to explore: The Legs of the Saint-Pierre Quarter by Dominique Roland, an insight into the world of Pierre Molinier, the scandalous avant-garde artist who shocked and fascinated his contemporaries, and Inside by Thomas Goupille, an introduction to the eroticism of Frédéric Fontenoy, his use of the view camera and his singular relationship with his models. The Legs of the Saint-Pierre Quarter, an investigation into the intriguing eroticism of Pierre Molinier

This film takes viewers on an investigation into the world of the fascinating artist Pierre Molinier, a post-war photographer of subversive eroticism found dead on his bed, in an unsettling mise en scène reminiscent of a self-portrait made twenty years previously.

You will discover his obsession with legs and lace, his photomontages acclaimed by André Breton and the surrealist circle, his transvestism and his love of freedom. To immortalise his staged compositions, Frédéric Fontenoy works with a large format view camera. In this film you will learn about this unforgiving precision tool that leaves nothing to chance. You will follow the discussions between the photographer and his models, the preparation of an original set with a 1930s aesthetic as well as the adjustments to lighting and posing to create the perfect photography.

Lastly, you will see the whole printing process resulting in the final photo. Retouching one stroke at a time with Marie-Pierre Bride

This film reveals the subtleties of Marie-Pierre Bride's traditional retouching with a brush, from her initial discussions with the photographer to the final enhanced print.

You will see that some things are left untouched and discover the retoucher's tools, her techniques for removing imperfections and her precision work.

Retouching did not wait for the digital era to demonstrate its artistry; it has been around as long as photography itself. With a brush and by hand, it must be discreet and serve the aesthetics of both the image and its creator. 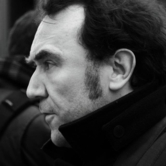 In general, things start in a room.  This is certainly true of the birth of photography. When Nicephore Niepce made his first attempts to capture an image, revealing to the world the famous view "from my window", the light must have crossed the room then the camera obscura.

As early as 1853, in France, there were 'not-for-public-display nudes': posed photographs tolerated by the chief of police, serving as academic studies for artists.

The representation of eroticism has evolved through artistic exploration. But its encounter with photography was decisive: not completely revealed, not completely concealed, it plays on the edge of what can be glimpsed behind the veil, on the ground glass, through lace, in these spaces where more is perceived than seen: eroticism is not synonymous with pornography.

Because pornographic photography has been around since the start too but, paradoxically, by "showing everything", it bypasses the desire, the expectation, the aesthetic and the intellectual construction peculiar to eroticism, this sophistication requiring the gazer to play along and be drawn as much to the image itself as to the photographed body.

Long thought to be the preserve of men, eroticism in photography now belongs to every gender and sex.

The "object of desire" fetish image, which replaces the body itself, undoubtedly reached its peak with the work of Pierre Molinier. He did without models, or rather used himself, to produce photomontages and create surrealistic bodies. Kaleidoscopes of multiple legs and thighs, objects of his own fantasies, form compositions of an unsettling beauty.

While Frédéric Fontenoy explores a very Dadaist tension through the disturbing eroticism of his mises en scene. At the crossroads of Surrealism and the roman noir, he echoes the gaze of Man Ray, of Bill Brandt for his nudes… and also of Weegee for his crime scenes.

Long thought to be the preserve of men, eroticism in photography now belongs to every gender and sex. There are photographic eroticisms, and each refers to different codes. Because codes and conventions are used: those of lace, of the muted bourgeois world, often evoke turn-of-the-century bordellos and their regulated permissiveness. For others, it is the conventions of submission, of leather, of the dominated body. For others still, those of the veil, of the ethereal, of the enhanced body.

Artists have managed to completely transcend the life-drive of desire at play with forms, staging, composition… photographic distancing: for this tension of the gaze to exist, there must be boundaries: "Look but don't touch!" (…and fortunately too, because there is no place today for violence towards the other under the guise of creativity.)

Circuit of the month

Here’s to all the men and women who, in their laboratories, unassumingly dedicate themselves to Photographers and to promoting Photography...
- Diamantino Quintas
+1 new movie Crime Scenes (How to become a forensic photographer)

The women and men working in photography
3 films