Unshackling ourselves from speed

Another DK2R? So soon? How time flies!

In this new selection of films, interviews and articles made to measure, we propose you take time out to reflect on the time taken in photography; take a step back, switch off from current trends.

So we approach this issue with solid references, first of all with the man who has long been the archetypal photographer-author: Bernard Plossu. In a first film from his home in the south of France, he confides in us his perception of time and the artistic eye; then in a written interview he granted us, he develops his relationship with printing.

And printing is to the forefront in our second film: L'Atelier (The Workshop), an original, exclusive documentary that introduces us to one of the most legendary processes in the history of photography: the Fresson process. A rare film that takes the time to approach these extraordinary craftsmen, true guerrillas of the lab, the last line of defence against speed!

To deepen the thinking on this process, the eye of André Rouillé (another reference!) is cast over the fruits of this craftsmanship on our behalf.

Finally, for a breath of fresh air and inspiration, Alexandre Deschaumes takes us travelling to the wide open space and shows us that we can use digital yet still devote time and attention to The Quest for Inspiration.

So let's take our time! Take a deep breath, ponder on the place that photography occupies in your life. And see you again soon (but not too soon, though!) for our next issue. The Workshop: Meeting the Fressons

This film will introduce a colour printing process that is unique in the world: the Fresson process. Its foundations were laid in the nineteenth century by a family which still perpetuates its know-how today, taking care to separate colours and prepare pigments. You will see a print appear layer by layer, and all the manipulations and the time this process requires. Through the history of the Fresson family we can read the history of photography, the fundamentals of colour. Michel and Jean-François Fresson take the time to explain to us the stages in the production of these legendary prints, one which bucks the trend of technological acceleration; a process that reveals a unique palette of colours. A day with Bernard Plossu

This film transports you to the photographic world of Bernard Plossu. At home in La Ciotat, he reveals his archives, his sources of inspiration, the importance of cinema in the construction of his pictures. Cleverly bringing out his black-and-white prints of Paris in the 1970s, he tells us how he takes photographs in motion. You'll discover a photographer who doesn't stop to photograph, to think, or to please, and who advises all photography lovers to do the same. It's a photography founded in freedom, far from the empire of technology and techniques; an unselfish impulse. Bernard Plossu also unveils a series of Fresson prints, this mythical process that has influenced his way of photographing. The naked beauty of nature photography with Alexandre Deschaumes

This film takes you on a journey through extreme environments (alongside the amazing photographer Alexandre Deschaumes) in a permanent quest for beauty. His staggering landscapes from inaccessible lands are the fruit of long research by satellite mapping and enterprising exploration. In this film, Alexandre Deschaumes opens up on the high-latitude paths: he tells us what excites him, how his photos are born, how he likes to compose them. Landscape photography is a remarkable art which is not limited to capturing one's environment, but which joins a physical and spiritual quest where nature becomes a mirror of emotions. The full title of this film is: "En guise d'introduction à l'histoire et à la technique du procédé Fresson", ([By way of] An introduction to the history and technique of the Fresson process), a very long title for a short film, but one which has the merit of clearly defining its content! Made from the original documentary "L'Atelier" (The Workshop), this seven-minute Quickie is indeed intended to introduce you to this legendary process that has marked the history of photography... and to make you want to watch the original film!

The Printing in photography: An interview with Bernard Plossu 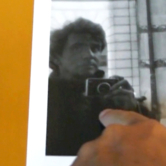 Bernard Plossu isn't usually very forthcoming. Each word reveals the coherence of a reasoned worldview, studded by aesthetic references. DK2R had the opportunity to ask him about printing, and his answers extend this central subject of the photographic act.

DK2R: Bernard Plossu, what part does printing play in your photographic writing?

BERNARD PLOSSU: If there's no print, there's no photo. That says it all! Of course printing is very important!

But what I seek is a kind of "discreet normalcy", certainly not a too-striking print that darkens the sky or highlights the drama! That would be the total opposite of what I'm trying to say (like cheesy film music that guides your emotions: it falls out of fashion so quickly)!

In black and white, subtle, soft greys, so as not to have an effect. (As Gauguin said: "Effects look good; they have an effect.") And in colour, the Fresson process, which is matte, allows me this same discretion of the printed image.

DK2R: Have you ever done your own prints?

BP: I did, learning alone in the bathroom, but I'm a lousy printer! I find old ones and they're OK, clean enough, but I gave that up when I returned from the Sahel; the light contrasts were too strong to print. So I gave up, and thanks to that, I was able to devote all my time to taking pictures, to photographic trips, to creating images. But when I send my negatives to be printed, I know exactly what I want to obtain.

Almost all American photographers print their own photos, whereas in Europe, the Doisneaus, Boubats and Henri Cartier-Bressons are all printed by their printers.

To me, the printer is my key co-worker, my soul brother; but for him, the photos wouldn't exist!

DK2R: You always work with the same printer, Guillaume Geneste, and in the case of your colour work, the Fresson workshop. How does your collaboration with a printer work? Do you often intervene? Do you like to be surprised?

BP: I've worked with Salaün, with Yvon le Marlec, and now in black and white with Françoise Nuñez at home, and with Guillaume Geneste for many years, my printer and great friend. In colour, with the Fresson family since 1967, and at one time with the late lamented Benny Karmazine. And now we're on our first tests with matt ink-jets! Watch this space...

By the way, in the film industry, the directors would film, but would never develop their films!

And their cameramen would never get as big a mention in the credits as directors and actors: Why not? It's unfair!

To me, the printer is my key co-worker, my soul brother; but for him, the photos wouldn't exist!

DK2R: How would you describe the aesthetic of the Fresson process?

BP: I don't know what to say about Fresson's aesthetic! As far as I'm concerned, for my photos, I'd say that what I like is matte and not glossy – not spectacular – discreet, saving the print's eloquence for what has been photographed.

DK2R: Your latest book, published by Textuel, is entitled "Tirages Fresson" (Fresson Prints). It's a nice tribute on your part, but the title also attests to the strong personality of the process (and of those who make it happen). Would you say that more than ever, your Fresson prints are a "four-handed" creation?

BP: Yes, working with Fresson is definitely a four-hander! The shot and its translation. I'd say that of any good printer!

DK2R: If the Fresson process didn't exist, how would you contemplate colour in your photographs?

BP: As I've worked with Fresson my entire professional life, I've never had to consider this question! At one point, for Kodak Stretch colour prints, I worked with Benny Karmazine: good matte prints, but without the Fresson grain! Now matte inkjet prints are the closest you get.

DK2R:  Have you ever imagined the print in advance when you took the picture?

BP: Yes. Sometimes when I take a picture I think: that'll make a good Fresson. And even sometimes in front of a landscape that I'm not even photographing, I think: "What a beautiful Fresson that'd make."

DK2R: The Fresson print seems to have escaped the injunctions of the era of digital dematerialization, precision, immediacy, consumption... Is this a form of resistance?

BP: Yes, the Fresson print is an act of resistance. Well said! As is the choice to keep film as my language, or old cameras like my Nikkormats, which are half my age!

Fresson prints are made slowly, gently, respectfully, a world away from the unbearable fake happiness of smartphones and other digital devices that can take 600 photos: and for what? 36 is plenty for the intelligence of this language!

Circuit of the month

To me, the printer is my key co-worker, my soul brother; but for him, the photos wouldn't exist!
- Bernard Plossu

The crucible of creation
2 films

Through the environments and atmospheres that move me, I search for resonance with my inner feelings.
- Alexandre Deschaumes

The Eye of the Photographer: Travels in Color - Lens Culture Article