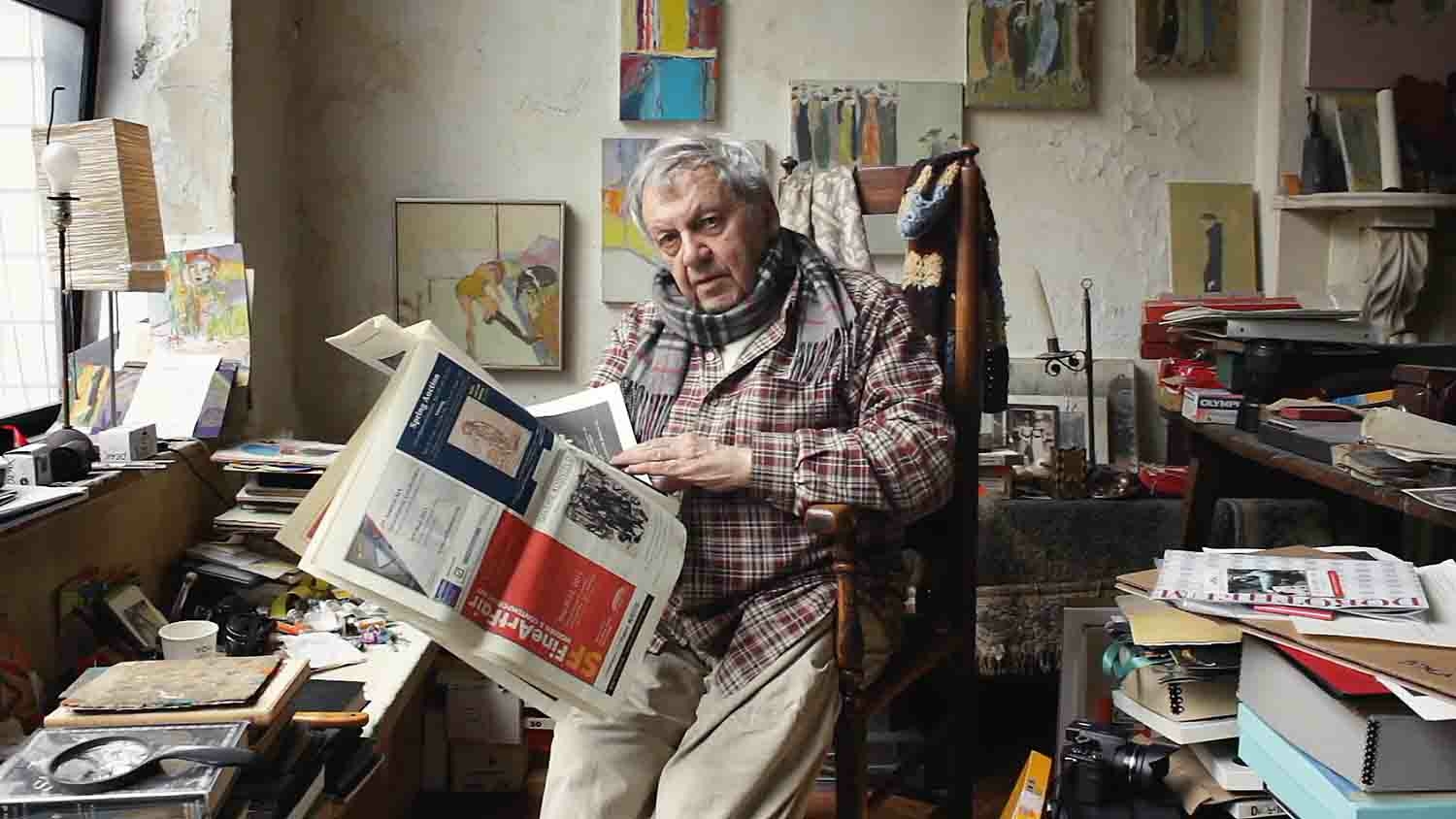 Saul Leiter: In No Great Hurry - Interview with Tomas Leach

For DK2R, British director Tomas Leach revisits his film "In No Great Hurry" on Saul Leiter.

With great sincerity, he confirms what is felt in the film: the meeting with Saul Leiter was more intense and profound than anything he expected when he began the project.

It is sometimes difficult to grasp the human chemistry that informs a meeting between a director and his subject: empathy, admiration, mistrust, or all at once.

Another lead, already mooted in our pages by Kimmo Koskela about Minkkinnen, could be guessed from this interview: a certain shared sense of humour.

We find in Tomas Leach a modest irony that echoes that of Saul Leiter.

Emmanuel Bacquet: How did you come up with this project dedicated to this legendary photographer?

TL: Pretty simply, I loved Saul’s work. I had Early Color and was just in love with it. There was very little to read about him online at the time and almost no video. So I thought I would do something about that. I didn’t realize it would be a multi-year, deeply personal project. I thought it might be something quick and fun and very popular on Vimeo.

TL: I’ve always been into photography as a fan. I buy a lot of photography books, go to a lot of exhibitions and find it a constant source of inspiration.

When I was much younger (like early teens), I really loved conflict photography and true documentary photographers. I thought maybe I could become one, and that sort of started the path that led me into filmmaking.

My dad always tells me I should get properly into taking photographs, which is a delightful little sideways insult on my filmmaking!

I love taking photographs, but haven’t ever taken the time to produce a body of work.

EB: Saul Leiter was a very discreet photographer, he said little about him, and he died shortly after the shoot. Do you think he wanted to leave you some kind of "aesthetic testament"?

TL: I think there’s definitely something in Saul possibly choosing me to tell his story. He’d definitely thought a lot about how he saw the world. And I know he didn’t agree with leaving a legacy as such, but he did have thoughts about photography, and life that were worth sharing. So maybe I was someone he could communicate with the world through.

But perhaps more than this, I was there, I was persistent and I was pleasant enough to hang out with.

He taught me more about being a human and an artist in general really, rather than specifics of color.

EB: Saul Leiter was New York's color photographer, what did he teach you about the city and color?

TL: Saul being in NYC was a big draw for the film. I initially imagined it to really be about the city and color as much as him. But the film ended up being something quite different. Either subject are huge things to take on and I didn’t feel like I wanted or needed to do that.

Obviously Saul’s work taught me lots about color, framing, and more…  it’s so tender and humorous and subtle and layered.

But Saul as a person? He taught me more about being a human and an artist in general really, rather than specifics of color.

EB: Saul Leiter made a living from commercial and applied photography, notably fashion photography for Harper’s Bazaar, how did he relate to work on commission?

TL: I’m not sure I can answer this fully, but there’s a great story about Saul being commissioned to take some shots of a model for Harper’s (I think). The model was told to meet him in the square, but after an hour went back to the office and complained Saul never showed up. To which the editor replied that Saul had already delivered the negatives! He’d taken her pictures from afar without her knowing.

EB: Did the photographer see your finished film ? In which case what did he tell you?

TL : Yes, I took the film to Saul when I’d finished it. Walking up to his apartment to show him was as the most nerve wracking moments of my life. And sensing that, Saul decided to tease me a little I think. He started telling me stories of people who had done articles about him or interviews with him, and that he no longer spoke to them because of it.

After 20 minutes of this, he said “let’s watch this then” and chuckled.

Watching it with him was a joy. He acted as a double act with his on screen self. Finishing sentences, cracking up at funny moments and often just saying ‘that’s true’.

He enjoyed it. He loved the music and how I’d shown the images full screen. We watched it in two halves as he was getting tired of listening to himself. But when it was over, he said “it’s fine. It’s all me, so what can I say. I think you did nicely”, which for me, was an incredible relief and compliment.

And then we went and ate pierogi at Veselka’s round the corner.

EB: What is your future film, your current project?

I’m finishing up a documentary tied in with the Olympics. And I’m working on some narrative feature films. One is an original screenplay I’ve written, another is an adaptation of the graphic novel Off Season by James Sturm. It’s an incredible book and I’m really hoping we can get the film made.

Obviously, the pandemic has been pretty disruptive in terms of getting projects made, so I’ve been using the time to research and write.